At the Kenmore Air Express Maintenance Hangar, you don’t have to look hard to notice one of the mechanics is not like the others. She is a she – a talented young, female mechanic.

Twenty-six-year-old Jenn McBeth has a dazzling smile, witty personality, and a passion for learning. She’s also not afraid of a little grease and a lot of hard work. Which is good. Because with women making up just 1.7% of the nation’s aircraft mechanics, she needs to be tough as nails to get ahead.

Born and raised in California, Jenn came to Seattle in 2015. She made the 20-plus hour drive specifically for Kenmore Air. “I packed up everything I own in my Honda Accord and drove north,” she told me over coffee.

To get her foot in the door, she joined the Kenmore Air family as a part-time mechanic and part-time admin. Today, she is a vital member of the maintenance staff – a young mechanic hungry for experience. 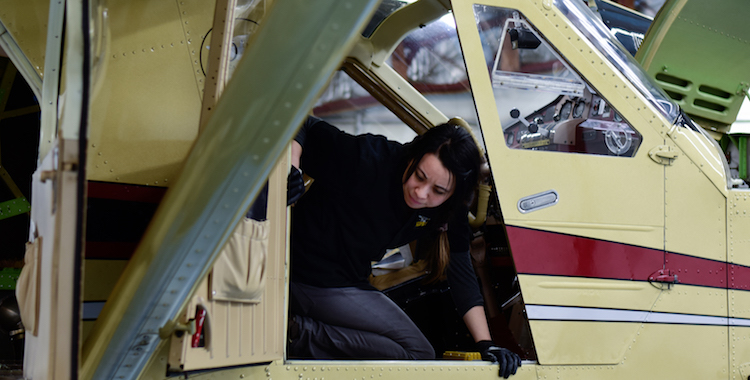 It Began With the Yoke

Jenn’s passion for airplanes didn’t begin with the wrench. It began with the yoke.

As a high school student, she was accepted into the Tuskegee Airmen’s Youth Program. The Tuskegee Airmen were the first African-Americans to fly and maintain combat aircraft for the United States Military. Following the war, the surviving members started youth and scholarship programs to support minority and disadvantage youth.

The Tuskegee Airmen were the first people to expose me to the world of aviation and believe in me. In their minds, I could do anything I wanted with the right exposure. And they gave me that. Part of the program was learning to fly. I was literally flying a plane before I had my driver’s permit. While completing her Community Studies degree at UC Santa Cruz, Jenn took a six-month hiatus. But it wasn’t to backpack around Europe sampling wine. Rather, she worked for Samaritan Aviation – an air ambulance organization that operates in Papua New Guinea.

The non-profit flew seaplanes equipped with amphibious floats into some of the region’s most impoverished areas. The crew provided emergency evacuation flights, delivered medicine, and developed community health programs.

They also maintained their fleet.

Her intention wasn’t to become a mechanic. In fact, she’d never even considered it before that trip. But when one of the planes needed its float repaired, Jenn asked if she could help. And her boss, Mark Palm, said yes. She recalled the moment:

My boss didn’t need to let me help. Most guys wouldn’t. But he did. And that experience changed everything for me. I always knew flying was amazing, but I suddenly discovered that working on the planes could be just as awesome.

And as it turns out, Jenn was actually connected to Kenmore without even knowing it. In the past, our maintenance department worked with Samaritan Aviation on occasion. “It was a serendipitous connection!” Jenn said. The Beauty of Allies

Diving into a man’s world wasn’t always easy. Jenn faced her fair share of barriers along the way. “The amazing thing is, when I busted through barriers, it was because an ally opened a door and helped me through it,” Jenn said.

Among those allies, Jenn included: the Tuskegee Airmen, her boss in Papua New Guinea, The Ninety-Nines (an international organization of licensed women pilots), and, now, the folks here at Kenmore Air.

While earning her A&P certificate in California, she found the world of aviation mechanics sparse in the ‘ally’ department. So coming to Kenmore was, “huge for me,” Jenn said.

For the first time in my own aviation history, I’m surrounded daily by a community of allies. And, I’m supported by people who just treat me like another human. That’s rare for me. That’s rare for my story. And, it’s my favorite part of working here.
The people I get to work with are incredible. Jason Marquez (Kenmore Air pilot and mechanic) believed in me from the beginning. Ira and John, my coworkers who I work most closely with, regularly champion for me. They have impartial expectations of what I can do. Everyone at Kenmore willingly gives me access to the knowledge they have. And as a woman and a young mechanic, that’s really big. Outside of stocking her toolbox and learning the finer points of fixing and maintaining old aircraft, Jenn’s passionate about reading. She likes music, plays the guitar, and dabbles on the ukulele. She writes, loves exploring the outdoors, and one day hopes to also earn her commercial pilot’s license.

She’s one impressive young lady. We’re lucky to have her onboard.

In Celebration of Blue
Scroll to top