The addition of a new maintenance hangar at Kenmore Air Harbor means our crew of amazingly talented mechanics can work year round without being hampered by Mother Nature’s wind and rain.

Kenmore Air’s headquarters sits at the northernmost tip of Lake Washington, on a small industrial road that parallels the Burke Gilman Trail. Most people drive past the entrance with hardly a glance – let alone a clue of the mechanic wonderland that’s lived there since 1946. Though seaplanes have become an iconic fixture of Seattle’s skyline, the five-acre lot they call home rarely garners much attention. It begs the question: What in the world really happens there?

The simple answer is, a lot of maintenance and repairs. The workhorse of Kenmore Air’s fleet, the de Havilland Beaver, is as old as most grandfathers. The last one was manufactured in 1967. The secret to keeping these old beauties running like new is Kenmore Air’s talented crew of mechanics.

Among the aviation community, they’ve earned such a reputation that the Beavers they work on are often referred to as Kenmore Air Beavers. Aircraft owners from around the world bring their planes here because they know job will be completed with precision.

The crew is a hard working team who, much like the U.S. mail service, shows up in heat, rain or sleet. But during the four-month span each year, between November and February, when the rain in Seattle can frequently be seen blowing sideways, they can’t get as much done as they’d like. The airline’s largest planes – the de Havilland Otters – often sit waiting for attention – outside.

With their 58-foot wingspan and nearly 13-foot height, not a single building on the Kenmore Air campus can currently house them.

“It’s cold. It’s wet. And the guys just can’t get anything done when it’s raining like that. It’s not uncommon to see several of them standing beside the bay doors sipping coffee, wondering when they can get back to work,” said Eric Ellison, Kenmore Air’s Chief Inspector.

That’s about to change.

On the western corner of the campus, the steel bones of a new airline hangar have been erected and metal siding is being added. The maintenance crew has currently dubbed it the “Otter Hangar.” While formally its name is likely to change, the current nickname is spot on. With 14,400 square feet of space, it will more than handle the 11-seater Otters that now live outside.

“It’ll even be able to fit a Twin Otter on amphibious floats,” said Ellison.

A de Havilland Twin Otter is a 19 passenger twin-engine plane. It has a wingspan of 65 feet. And with amphibious floats (floats that have wheels attached), it has an impressive height of 22.8 feet.

Furthermore, the hangar will utilize an energy efficient radiant heating system. Using natural gas, the system will heat objects and people within the hangar, rather than the hangar’s air.

“Typically, you warm the air within a structure. But in the middle of winter when we open the doors to move a plane, we’d lose all that heat and have to start warming the air again,” Ellison explained.

Radiant heating will mean that even with the doors open, those within the building will remain warm, dry, and productive year round. 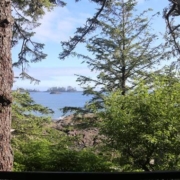