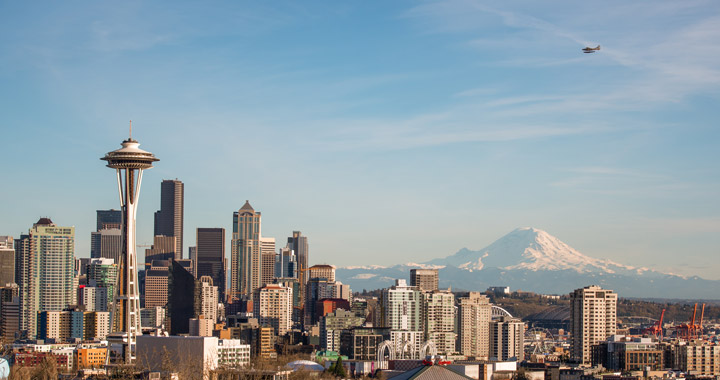 How an iconic seaplane and observation tower came to define the Pacific Northwest experience.

It was 1960, and the morning mist was still rising off of Lake Washington as Howard H. Wright climbed into the yellow and white Cessna 180 seaplane patiently bobbing alongside the wooden dock with pilot Bob Munro. The short flight to the San Juan Islands, about 60 nautical miles northwest of Kenmore’s Air Harbor, was the first intersection of two Seattle families that would go on to shape, and sometimes define the Pacific Northwest experience.

In fact, flying above the Puget Sound today in a Kenmore Air seaplane is still the best vantage to understand how these two families, the Wrights and the Munros, influenced the Pacific Northwest — and how their descendants are still doing it today.

Howard Wright owned a construction company that helped build the Grand Coulee Dam on the eastern side of the state in the years before World War II. Industry and population growth in the region was fueled by its construction, as were the wartime industries located in the Northwest.

The seaplane company, whose services Wright hired on his inaugural 1960 flight, was started by three friends who reunited after World War II to put their flying and mechanical engineering skills to new use.

Wright played his own part in the fate of the region when he and a group of men thought that visitors of the soon-to-be-held 1962 World’s Fair needed something remarkable to remember their visit to Seattle. His company would build one of the country’s most iconic structures: the Space Needle — a symbol for the Century 21 Exposition and America’s commitment to the space race.

Getting Started in Seattle

Four generations of Wrights have left their mark on the Pacific Northwest since the family arrived in Seattle. Howard H. Wright, whose weekly flights with Kenmore Air brought him to the beautiful San Juan Islands, was from the second generation. In the Great Depression, the family had moved to Seattle and built an apartment building on Capitol Hill, a central neighborhood now frequented for its buzzy bars and highly rated restaurants. It was one of the first projects that he and his father took on together in the city.

Those regular flights to and from the San Juans in the ’60s made him a Kenmore Air regular. Kenmore Air had developed a reputation for safety, customer service, and reliability that was unmatched and grew over the decades. Similarly, the Wrights’ construction company continued to grow. By the 1980s when the company was sold by the Wright family, the firm was one of the largest in Washington, where a series of high-profile projects had brought the company from humble beginnings as a builder to a developer of the high rise cityscape.

Foremost among those achievements was the Space Needle. For Wright and his son, the Century 21 Exposition was an opportunity to introduce the Pacific Northwest to the wider world and, in doing so, write a new chapter in America’s history. The 1962 World’s Fair would be held just north of Seattle’s downtown core, at the southern foot of Queen Anne Hill. To its west lay Elliott Bay and the shores of the Puget Sound. To its east was Lake Union, where Kenmore Air would eventually expand.

At the time of its construction, beginning in the early ’60s, the world was under the shadow of the Cold War. A small group of developers that included the Wrights had dreams of creating a landmark that the world would remember as the symbol of the exposition. They hoped to place their creation alongside the Eiffel Tower and the Chicago Ferris Wheel, as structures that inspired generations to dream of the possibilities the future would bring.

The company, founded years earlier by the elder Wright as a small builder before moving to Seattle, had already made a name for itself when plans for the World’s Fair began. The risk they took in taking on this project paid off, though, and the Space Needle became an instant hit.

Postcards featuring the Space Needle made their way to mailboxes around the world. They still continue today, with one distinct addition — the unmistakable Kenmore Air seaplane, caught mid-flight, usually in the foreground of the Space Needle.

Taking off from Lake Washington

Bob Munro, Reg Collins, and Jack Mines, had no idea what Kenmore Air would become when they founded the company in 1946 at the edge of a bog in the northern corner of Lake Washington. The three friends had simply reunited after World War II with an idea to create a seaplane business in the Pacific Northwest. With one plane and a hangar, they started making repairs and chartered flights from the then-sleepy shores of Lake Washington. They also started selling Seabees, another photogenic seaplane which, under the skillful flying of Munro and others, would make daring glacial landings while in Kenmore Air’s fleet.

Though based just outside Seattle, Kenmore Air grew up alongside the Northwest’s largest city and earned a reputation for hard work and safe flying. While Howard S. Wright Construction Company was at work getting the city ready for the Century 21 Exposition, Kenmore Air was expanding their Air Harbor on Lake Washington.

In 1959, Bob Munro announced that Air Harbor was in a position to begin construction on a new office and shop building, built near the original hangar. Chartered flights would increase over the next few decades. During that time, the cities surrounding Seattle also grew, including Kenmore. The sleepy towns on the edge of the lake were getting busier, industries were growing, and flight service expanded.

In the ’50s, Kenmore Air had also started flights to the San Juan Islands. The short flight from Air Harbor was exactly what the community was looking for when they wanted to connect with the seemingly far-flung outposts of the San Juan islands and beyond.

The ’60s and ’70s were challenging times in the Pacific Northwest. In 1971, a famous billboard asked, “Will the last person leaving Seattle turn off the lights?” Still, Kenmore Air and the Wrights soldiered on, and the city bounced back.

In the ’80s, Kenmore made another expansion, this time towards the waterfront just a couple miles from the former site of the Century 21 Exposition, the Seattle World’s Fair. The company was growing, and room was to be made for expanded operations, including a seaplane terminal on Seattle’s Lake Union. They purchased the land of a competitor and opened the terminal at 950 Westlake Ave N, where Beavers, Otters and Caravans now take off and land beneath the backdrop of the Space Needle.

In 2018, a new relationship between Kenmore Air and the grandson of Howard H. Wright took root when Seattle Hospitality Group invested in Kenmore Air. Seattle Hospitality Group was founded in 2002 by H.S. Wright III, a grandson of the men whose company shaped much of Seattle’s modern-day skyline and whose weekly flights introduced him to what would become the largest seaplane operator in the world.

As his father, grandfather, and great-grandfather did before him, this Wright also takes a personal interest in businesses that would enhance the city’s ethos of arts and culture. In the years since building the Space Needle, the construction business also built the Columbia Tower, the tallest building in the state. Though the construction business has since been sold and its headquarters moved, the company retains its original name. For visitors to the Pacific Northwest, stops at the Space Needle and seaplane flights with Kenmore Air often top their travel lists. The history of the region is intrinsically tied to these two icons, and longtime residents will often conjure the very image of the Beaver flying over Lake Union with the Olympic Mountains in the background as the perfect shot to describe the Pacific Northwest.

The partnership established in 2018 between Seattle Hospitality Group and Kenmore Air is the result of a decades-long relationship between two companies and the families that shaped the Pacific Northwest.

For more than 70 years, two family-owned companies shaped the Seattle skyline and filled the sky. Their buildings and planes captured imaginations and inspired people to look up and dream higher. That legacy continues today as old partners discover new possibilities.

More About the Kenmore Air Family

Jan Fields tenure began June of 1972, working as a receptionist and charter specialist during her summer vacation to help pay her way through college.

It’s said, one of the secrets to happiness is making your vocation your avocation. For Ken VanWinkle, Director of Operations and Pilot at Kenmore Air Express, this couldn&rsquo;t be truer. Flying is more than Ken’s job — it’s his passion.