Blog
You are here: Home1 / Blog2 / Blog3 / Things to do in Vancouver4 / World-Renowned Vancouver Aquarium Tucked within Vancouver’s beloved Stanley Park, the Vancouver Aquarium has earned a worldwide reputation as a leading marine science center. It’s home to more than 70,000 animals heralding from the Arctic to the Amazon.

While it’s known as one of the top ‘kid-friendly’ Vancouver activities, you don’t have to be a tiny tot to be blown away by this stunning destination. Throughout the 166 aquatic displays, you’ll find a diverse array of inhabitants including a rescue dolphin, sea otters, and sea lions. And if you visit during the winter holidays, you might even spot a jolly old elf scuba diving with the fishes. (He’s known fondly as ‘Scuba Claus.’)

When the museum opened in 1956, it was the first in Canada. Throughout the years, it’s been committed to providing impeccably high standards of animal care and visitor education.

In addition to the large habitats, the aquarium has an interactive Wet Lab where visitors can get their hands wet by investigating a diverse array of live marine animals. This unique experience is open to the public on weekends.

During the summer months, be sure to check out the aquariums Waterfall Café — where the sustainably sourced menu is paired with views of the aquarium, a 300-year-old Western Red Cedar, and a stunning sculpture called Chief of the Undersea World. How to Get to the Vancouver Aquarium

There are four ways to get to the Vancouver Aquarium: drive, bike, bus or walk. One of our favorite ways to get there is on foot. From the Vancouver Harbor Flight Center Seaplane Terminal, it’s just a 1.5-mile easy walk along the Seawall and through Stanley Park.

What Animals are at the Vancouver Aquarium?

The Vancouver Aquarium is an Ocean Wise® initiative, which means it supports critical research, direct action, and education. At the public aquarium, scientists, educators and conservation experts not only to protect our oceans but to inspire others to also become ocean protectors. The animals at the Vancouver Aquarium vary widely, including a rescue dolphin, sea lions, seals, sea otters and more. 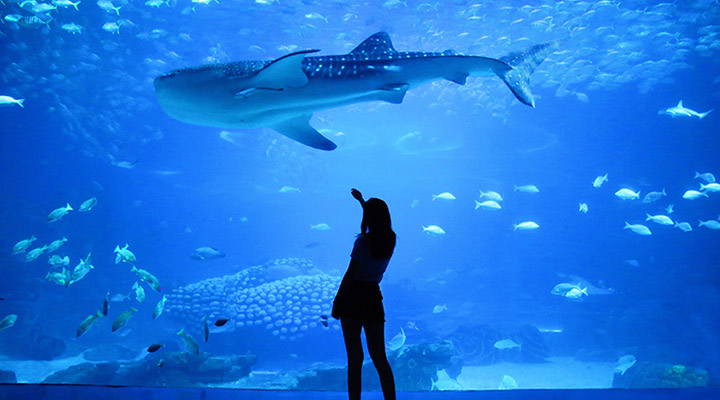 Does the Vancouver Aquarium Have Sharks?

You can see sharks in the Vancouver Aquarium’s Tropic Zone. During the Shark Talk (or Feed) show you can see these massive giants in action. But don’t worry. These ocean guardians aren’t on major hunts. The aquarium feeds them a mix of mackerel, smelt, herring, and squid.

Are there Whales at the Vancouver Aquarium?

There are no whales at the Vancouver Aquarium. In years past the aquarium was home to beluga whales, also known as white whales. The medium-sized toothed whales have distinctive pale coloring; robust, stocky bodies., and small rounded heads. After much controversy and a change in Canadian law, all of the aquarium’s beluga whales have been transferred to other facilities. Where Should You Eat Near the Vancouver Aquarium

There are a variety of places to eat near and at the Vancouver Aquarium. The aquarium’s Courtyard Café is open 365 days a year. During summer months, you can also enjoy its outside café, which doesn’t require aquarium admission to access.

Within Stanley Park, the Stanley Park Pavilion offers casual bar perfect for grabbing a pint and a bite. At Prospect Point Bar and Grill there’s a mix of patio and indoor dining, with a casual menu that’ll please everyone. And for those who passionate about trying all the breweries, the Stanley Park Brewing Restaurant and Brewery is a can’t miss.

Along the Seawall, those looking for a meal with a view will love LIFT Bar Grill View where water-front dining is paired with a chic atmosphere.

ADDITIONAL FUN THINGS TO DO IN VANCOUVER BC

Want to get to know Vancouver? Discover the best places to eat, sip, hike and play like a local from locals!