Smack dab at the end of the road – literally, it’s the last stop on Canada’s transcontinental highway, the Pacific-Rim Highway – this quaint town has yet to be overrun by commercialized tourist attractions. Its landscape remains pristine. It’s locals, all 2,500 of them, embody the back-country, wave-as-you-pass friendly attitude you’d expect in a small town. There isn’t a Starbucks. Nor is there a McDonalds, Jack in the Box or Pizza Hut. Heck, their strip mall, if you can call it that, is an eclectic collection of buildings. The taco stand is tucked next to the yoga studio. The chocolate shop is nestled behind the café. Across the gravel parking lot, a local artist shows off his wares beside a surf shop with the latest in wetsuits and boards.

On the westernmost point of Tofino’s Chesterman Beach, nestled among its trees and perched on its rocks, rests a series of buildings which appear to be more nature made than man-made. And, if we let ourselves be a little spiritual about the whole thing, they kind of are.

The Wickaninnish Inn is far more than a Relais & Châteaux resort. It’s rustic elegance steeped deeply in Mother Nature. It was conceived, designed and built with the forest and the coast in mind. Buildings were oriented to preserve trees. Prior to construction, the ground was cleared by hand to ensure no unnecessary vegetation was lost.

What you don’t expect is the complimentary rain gear hanging in each closet or the rain boots, provided in your size upon request. What you might not be prepared for is the wood fireplace mantle in your room, carved on site in the Inn’s Carving Shed. You might be surprised to learn the same hands that carefully shaped log after log into elegant posts and beams, were the same hands that carved the Inn’s front doors. The hands belonged to Henry Nolla, the Inn’s original master carver who lived on site until he passed away. A quirky gentleman with a skill for transforming wood into art, Henry was known for taking dips in the buff.

Swimming in such a state is no small feat for a beach where the water’s temperatures are lucky to reach 60 degrees. Wetsuits are year-round attire for nearly every ocean-goer. And, ocean-goers there are aplenty. With its sandy bottom and nearly consistent source of waves, surfing is one of Tofino’s main highlights for visitors and locals alike.

While venturing out to the beach for a stroll or a dip, be sure to visit the Carving Shed. The energy inside is palpable. Henry’s spirit lives on in the continued work of his mentee, “Feather” George Yearsley and Christen Dokk Smith, the Inn’s carvers in residence. As tempted as you may be to enjoy room service after your beach stroll, you’d seriously be missing out if you didn’t visit The Pointe Restaurant. The view is breathtaking. With over 240 degrees of Pacific Ocean viewscapes, it can be hard to concentrate on the menu – a completely acceptable option for those who opt for the Tasting Menu.

However, should you find the will to tear your eyes from the waves, you’ll find a farm-fresh menu, rich with organic ingredients and bursting with unique flavor combinations. With a sea-to-table mentality, this is ocean-centered fare. The menu changes regularly. It might feature albacore tuna, lightly seared and sprinkled with honey water; local Tofino, heirloom beets and sweet cream; or halibut, pan roasted and accompanied by chanterelle, apricot and sweet onion ragout. Indeed – seafood is the star. However, for those who are more partial to meat and potatoes, The Pointe Restaurant doesn’t disappoint. Their tenderloin melts in your mouth and their crispy pork belly has just enough fat rendered from its cap to make for a smooth pork-forward bite. Though I’m certainly contradicting myself, I’d be remised not to tell you about the sweetbreads. If you see them on the menu – order them. I implore you. Sure, they’re not seafood. And, in normal life you may not want to mess around with them. But good golly – here they have a smooth texture and a rich umami flavor from their mushroom pairing.

Dessert at The Pointe Restaurant is a bit more difficult, as saving room is a challenge. However, with their insane lineup of tasty treats you might consider returning the next night for a sweet-filled affair. (No one will judge, but they may turn green with envy.) Among the favorites is a house made chocolate bar studded with raspberry and chocolate cake with hemlock ice cream. Indulging in dessert is one thing, but at the Ancient Cedars Spa, your body can discover a new level of relaxation and rejuvenation. It’s nestled into the ocean level of the Pointe building, creating a space that’s sheltered by the forest and adjacent to the wave-dashed rocks of the Pacific Ocean. Offering a wide variety of treatments, one of the most unique is the Hishuk Ish Tsawalk Awakening Treatment. It incorporates elements of fire, water, earth and air. The treatment includes a full-body exfoliation using seaweed polish made from hand-harvested Vancouver Island seaweed. The polish, they say, invigorates your soul.

In 1955, Dr. Howard McDiarmid moved to Tofino. He planned to get his MD feet wet at the country hospital and then move back to the city to open his own practice. Little did he know he’d never leave.

Smitten with the location, he assumed responsibility for the Tofino General Hospital. In all the years he worked there, only one man who arrived failed to leave. A pretty impressive track record for a hospital which still only has 12 beds.

Back when Dr. McDiarmid arrived, Tofino was only accessible by sea and air. It wasn’t until 1959 that a logging road past Port Alberni opened a pathway to Nanaimo. The pothole-ridden dirt road may have been treacherous, but it was a path.

His vision was a motel. Wanting nothing to do with restaurants or food, he planned a well-kept, but not extravagant, location where he could welcome visitors. By the late 1960’s, Tofino’s beaches were a haven for pioneer surfers, conscientious objectors and wayward hippies. Dr. McDiarmid could see that this pristine slice of heaven would one day become a destination for those looking to relax and unwind. He wisely purchased land.

His son, Charles, had other ideas. Having spent 13 years in the hospitality industry working with Four Seasons Hotels and Resot, he saw the full potential for the Inn’s location on Chesterman Beach.

Today, the Wickaninnish Inn welcomes visitors from near and far. During the summer, guests stroll the beach, collecting shells, dodging waves and checking out starfish. Come winter, they cozy up by one of the Inn’s numerous fireplaces to watch the storms rage outside. In a true family effort, Charles, his brother Bruce and his dad worked together to create one of the finest destinations in the world.

This is for certain – no matter when you come, your heart will leave a little more full than when you arrived. This place just has that kind of magic. Kenmore Fizz at the Resort at Port Ludlow 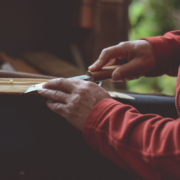