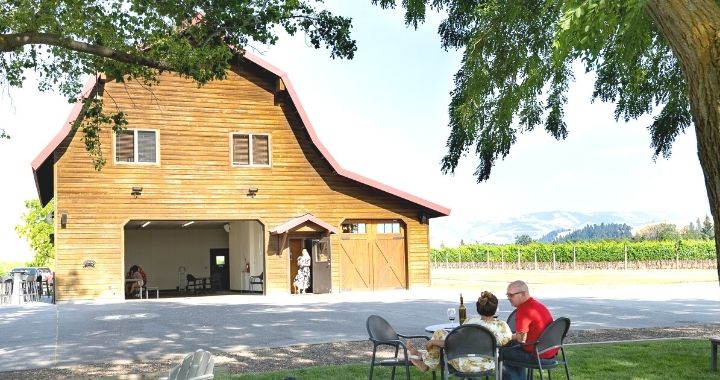 Someone much less clever once said of New York, that it was a city “so nice, they named it twice.” But those of us who spend our time between the nether regions of Parallels 46 and 47 understand that there is really only one city that accurately fits that description.

Walla Walla (a town so nice … you know the rest) is tucked away in the southeast corner of Washington, where the state meets with Idaho and Oregon to serve up a hardcore Northwest vibe with a little something for everyone.

It is where small-town hospitality meets the French Rhone Valley. Where Lonestar belt-buckles and old faded Levi’s meet oaky notes and bold tannins. It boasts one of, if not, the top golf course in the state. It’s a burgeoning Foodies delight and the recreation options are endless year-round.

It’s hard to experience all that this sleepy little Eastern Washington burgh has to offer, but my good friend Sara and I figured we’d give it a try.

A quick hop over of about an hour is all it takes from the Seattle-area before touching down at Walla Walla Regional Airport. Taxi’s, rideshares and private car services are all available once you arrive.

We were scooped up by our driver, Jeevs (go figure, right?) and immediately taken to Wine Valley Golf Club, about a 15-minute ride from town.

As you turn north off Highway 12 on Frenchtown Road and head toward the course, the rolling hills of the recognizable Palouse are only interrupted by pockets of lush vineyards poised to deliver the fruit of its sublime and aged nectar. A left at the Corten Steel sign and you’ve arrived at Wine Valley Golf Club.

The rustic Valley View Pavilion, where various large group events are held yearly — from weddings to conventions to class reunions — greets you to the left as you make your way up the driveway to the clubhouse. An expansive driving range and practice area is ready for your warm-up on the right. As we reached the clubhouse/pro shop, we were greeted by an effervescent Emily who — when not collecting your greens fees and charging your card for some outstanding, logoed, pro shop “swag” — plays college golf at Washington State University. She set us up with a cart and off we went to the first tee box.

As much as I’d love to tell you about my round, in shot-by-shot detail, I’ll look upon you with mercy. I will say, however, that the Wine Valley experience was definitely all it was cracked up to be and then some. We played it from the tips, which was long, but the fairways were spacious and forgiving. The views were delicious, particularly the tee box on Hole #5. It looks southwest from probably the highest point on the course, with the Blue Mountains in the near distance to the left, you look down onto the long par-4 with a wash running down the left-hand side that cuts in front of the largest green Wine Valley has to offer (11,360 sq. ft.).

After the round, we were able to spend some time with Director of Golf, Chris Isaacson, who filled us in on some of the history of the course, the design of Dan Hickson (who also designed Ban- don Crossing) and the accolades that they’ve received since being open just twelve short years ago. But what drew me in when speaking with Chris, was his enthusiasm for not just his course, but his town of Walla Walla.

I’m not sure about you, but I love to hear and see people who have pride for where they live and aren’t ashamed to do a little bragging about what makes their home so special.

Chris told us about the great Golf and Stay packages that they have in partnership with the historic Marcus Whitman Hotel in downtown Walla Walla and he directed us on where to go in town to grab a bite before hitting some wineries.

Exiting off Highway 12, headed back into town, you are immediately greeted by the Walla Walla Steak Company next door to the Crossbuck Brewery — one of about a dozen breweries in the area. We couldn’t just jump at the first girl to ask us to dance, so we passed on steak and continued into town to get a better perspective of what we were dealing with.

We chatted up some locals as well as other “experienced” out-of-towners who had “done” Walla Walla before, to see what they were recommending.

The choices were bountiful. Mediterranean at Saffron. Authentic Mexican fare at Grandma’s Kitchen. Great, straight-forward pub fare at Public House 124. Late breakfast at Bacon And Eggs. A little something healthy at Graze. All fantastic choices and on the list for my next visit, but the one name that kept coming up over and over again was the French bistro, Brasserie Four.

Our server, Heidi, was very welcoming and extremely patient with this French Cuisine neophyte. She recommended a number of items, including their wonderful wood-fired pizzas, but ultimately we settled on the Charcuterie starter. (Mostly because I love saying charcuterie and one can never go wrong with a wood plank piled with cured meats and cheeses.) Then I went classic with their “Moules Frites.” Someone a little less cultured might call them mussels.

The atmosphere in Brasserie Four was bustling and very comfortable and receptive to larger parties while also not losing the appeal of a more intimate setting for two. The walls are adorned with the art of locals who are chosen to display their passion projects for all to see.

We passed on dessert so we could check out Colville Street Patisserie, which we had walked by earlier. As we entered the shop, I nearly knocked over a woman who was carrying six affogatos back to her co-workers at Butcher Butcher, next door. By the way, bring your doggie by the adjoining butcher shop and they’ll give him a nice beef tendon to chew on for a while.

For a sweet tooth like me, immediately I was “home” when walking through the door at Colville Street Patisserie. The competing wafts of coffee and baked dough greeted me like an old friend. The choices were overwhelming. Eight various flavors of gelato sat patiently, encased in glass, each one waiting to be chosen and delivered in a perfectly rounded package of goodness to a deserving family (btw, you HAVE to try the cardamom).

And the baked goods, oh the baked goods, vying for the same attention and delivering with each magical bite. I haven’t even mentioned the cheesecakes and mousses which certainly played no second fiddle in this shop — it was all too much for this weak-kneed pushover. An embarrassment of riches for ol’ Sugary McSugarson here. Ultimately, I settled on a cherry Danish but included a ham and cheese croissant to go, which held up nicely, warmed the next day. (This is a no-judging space here.)

Next stop was wine tasting, with a disclaimer here that I know next to nothing about wine, beyond loving to say Martini and Rossi Asti Spumante. (Obviously, I like saying words.) I have almost no history of indulging in it (beyond mixing a bottle of Gallo with 7Up at college parties in Bellingham). And, I don’t particularly have a palate to distinguish good quality from poor. But as Harold Ramis said in Stripes, “…but I am willing to try.”

So off we went to Walla Walla Vintners.

Back to Highway 12, this time eastbound for about four miles and then continuing east on Mill Creek Road for another four. A left on Vineyard Lane and you’ve arrived. The driveway looks like it was cut through a lavender Chia pet as our car was engulfed in a flowery purple blanket of the aromatic, calming, native herb of the Mediterranean.

Immediately, to the right, you pass a’Maurice Cellars, which was closed on this day, but a place to definitely return to another time. Continuing up the drive a little farther and you come to Walla Walla Vintners.

This was my first time at a winery, so I had really no idea of what to expect.

As we pulled into the gravel parking lot, there was a patio directly in front of us with umbrellaed tables and couches nicely spread throughout. Off to the right was the vineyard itself. To the left, was a big, beautifully-designed barn which served as the tasting room. On the backside of the barn is where we were sat on the grass, under the shade of three old-growth beech trees, in Ad- Adirondack chairs. It was a perfect setting for this first-timer.

The tasting menu consisted of five wines, moving from lighter to heavier. I imagine this is the way it’s normally done but you already know that, so indulge me.

The first on the list was a 2020 Sagemoor Vineyard, Sauvignon Blanc. A white. I’m not much of a white wine fan but it was a nice way to kick off the afternoon. I swirled it around in the glass, recognizing that I couldn’t determine good legs from bad, jammed my nose deep into the bowl in a futile attempt to distinguish an aroma I wasn’t trained to recognize, took a sip and swished it around in my mouth trying to pick of a variety of notes that my unrefined palate can’t diagnose and finally swallowed. That was the best part.

I earnestly continued this pattern throughout the tasting. Making every effort to pick up on the descriptions given to us by the lovely Rose, who was delivering us a new bottle to savor, every 15 minutes or so.

Next on the list was a Walla Walla Valley, 2017 Syrah. Syrah is my favorite wine. One of my wine snob friends told me once that Syrah is for amateurs, so this may explain why it works for me. It was excellent.

That was followed by a 2016 Rive Gauche and a conversation about tannins with John, the staff manager. He was extremely helpful and patient with my way-too-many questions about tannins and oakiness and peppery notes.

It was great to hear someone with rich knowledge about wine and a passion for their job. I could have capitalized John’s time the entire afternoon but I knew Rose awaited with her next pour and kind smile.

Next on the list was a 2018 Walla Walla Valley Merlot, which was followed by a 2017 Sagemoor Vineyard, Cabernet Sauvignon and things became less about the wine and more about great conversation and hanging out with good friends.

I’m starting to understand why trips like these are so sought out and special.

Charter a Flight to Walla Walla

Walla Walla is a charter destination that’s easily accessible in Kenmore Air’s new Pilatus PC-12, which offers a luxurious and private way to get away for the day, the weekend or longer.