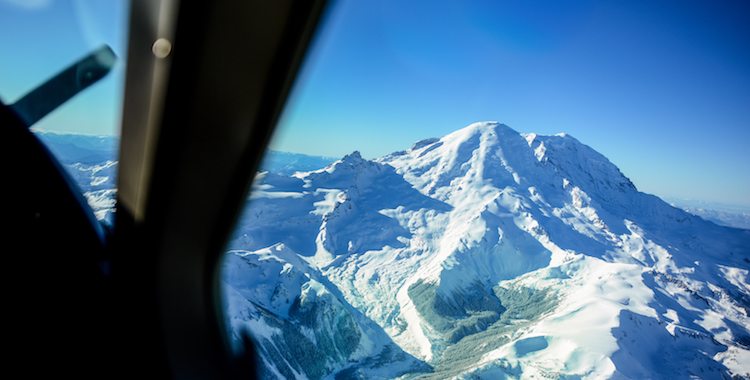 Witnessing the towering peak of Mount Rainier is a quintessential Pacific Northwest moment. And, there’s no better view than from the window seat of a 10-passenger Cessna Caravan.

The massive mountain dwarfs the other peaks in the Cascade Range. (They summit at a mere 6,000 feet.) This ice-covered monstrosity is jaw-droopingly beautiful, dominating Seattle’s skyline and beyond.

Birthed From Rock and Ash Mount Rainier is not the result of a single eruption. Rather, it’s a stratovolcano – a cone of stone gradually formed by intermittent seismic eruptions and lava flows.

Scientist estimate the first eruptions began roughly 500,000 years ago. The cone likely topped out at 16,000 feet above sea level. However, a massive eruption reduced the giant’s stature.

In addition to losing some of its height, the collapse created a 2-mile diameter depression on the northeast face. It sent a 100-foot-high mud wall surging from the mountain. Known as the Osceola Mudflow, the mud kept running for 125-square-miles until it reached the waters of Puget Sound. Mount Rainier hasn’t had a major eruption in nearly 1,000 years. While the sleeping giant has had smaller eruptions – resulting in equally scaled down mudflows and floods – it’s considered dormant.

The downtime has been kind to its steep hillsides and rolling valleys. Mount Rainier National Park’s lush landscape has become a destination for outdoor enthusiasts from around the world. Here, wildflowers abound and forests tower.

Fly Face-to-Face with a World Wonder 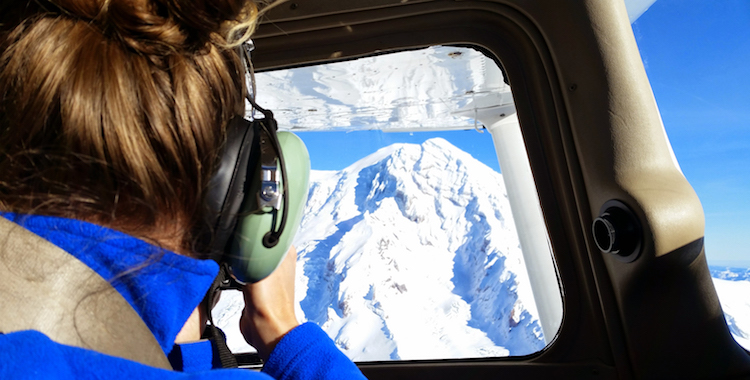 And when sitting face-to-face with it – you’ll understand why. The sheer rock walls of volcanic stone are layered with massive sheets of ice. Below its impressive crest rests a lush tree line studded with glacier-feed lakes.

And as if staring at the giant doesn’t make you feel small enough, ski resorts on the surrounding peaks reveal ant-like men below. Its size is humbling. This is one of Mother Nature’s true wonders. And from a window seat on a Cessna Caravan, you can get up close and personal.