Seattle may be best known as the birthplace of Microsoft and Starbucks. However, the Emerald City’s famed industrial history began long before electric guitars and computer code. It’s arguably, Seattle’s first major contribution to the world began on Lake Union when Bill Boeing launched his first aircraft in 1916, a Boeing B & W Seaplane.

Today, a replica very similar to that first plane hangs in the Great Gallery at the Museum of Flight. It’s suspended from the rafters of the 3 million-cubic-foot, six-story, glass-and-steel exhibit hall. Daylight floods the space during the day and at night, it’s dramatically lit to showcase the stunning architecture.

But the museum doesn’t stop there. There are five additional, awe-inspiring galleries. It could take you days to see everything. And seeing as the galleries are indoors or covered, that’s just fine! The Museum of Flight is the perfect place to explore on a rainy day. (It’s also a great place to get in your steps. I walked nearly five miles during my visit and I felt like I’d hardly scratched the surface!) One of the highlights of a visit to the museum right now is the APOLLO exhibit, which features the first public display of a rocket engine that launched Apollo to the moon. It will be open until January 2, 2019. The dramatic exhibit highlights how sparse space travel truly is and the space restrictions astronauts faced. It was simply breathtaking. 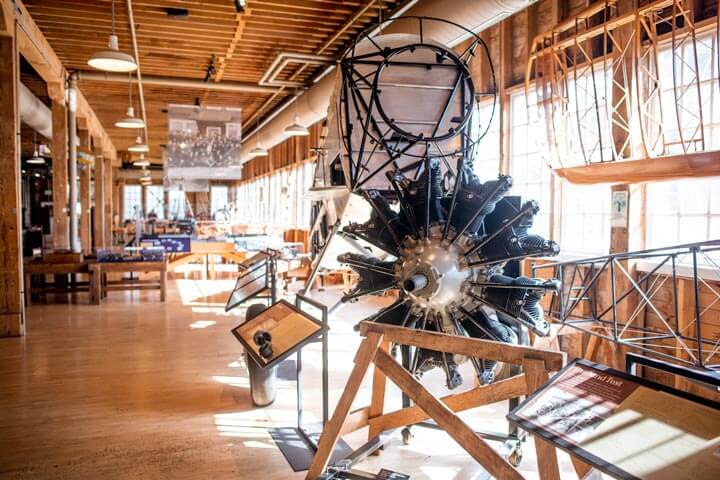 The scent of wood shavings hangs in the air, as it did 100 years ago in the very same building. The two-story Red Barn gallery is the birthplace of the Boeing Airplane Company. The space is warm and inviting. Wooden mullioned windows and skylights fill it with natural light. Wood rafters and wood beams are a far cry from the steel you’ll find throughout the rest of the museum. And there’s something humbling about that. Something about seeing where it all began that grounds you.

Wander Through a Space Shuttle

Ever wondered just how big a space shuttle is? Now you can see it firsthand. The museum’s Space Gallery features a full-scale mockup of a space shuttle orbiter used by actual astronauts at the Johnson Space Center in Houston. And, you can walk inside if you want! Located beside the Space Gallery, the museum’s Aviation Pavilion features a 3-acre covered display that’s home to 19 rare and unique aircraft. You’ll find commercial jets, military airplanes, and a FedEx Air Cargo exhibit that shows how packages and loaded and handled through air travel. The Pavilion is even home to the first jet Air Force One!

In the middle of mountain ranges, lakes and ocean bays, Seattle is a green wonderland of viewpoints, epic restaurants and diverse culture.

If you find yourself looking outside at the rain and thinking, “Not today,” these 11 Seattle spots are an indoor blast of a good time.

See All Entries
Where to Drink Tea in Victoria